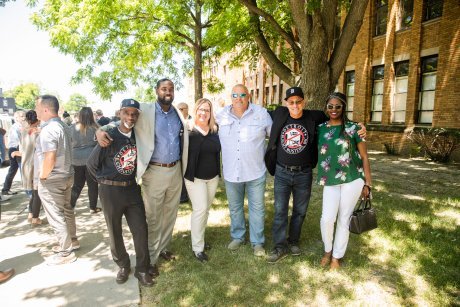 “We are grateful to MSHDA for awarding critical funding for this development,” said Jason Headen, vice president of the Detroit market for CHN Housing Partners. “There is a very clear need for more affordable housing in the city of Detroit, and the funds generated by this award will make it possible to increase housing options for low to moderate income Detroiters.”

The Orchard Village Apartments will be built at Orchard Street and Santa Clara Street between Lahser Road and Burgess Street, just one block away from the Old Redford theater and DBB’s Artist Village Detroit in the neighborhood’s commercial corridor. The project is part of the City’s framework plan for northwest Detroit along Grand River Avenue – a neighborhood development strategy that has short and long-term strategies for housing and retail development, streetscapes, parks and green stormwater infrastructure.

“The Orchard Village development is an extension of the work Detroit Blight Busters has been doing in Northwest Detroit for the past 34 years,” explains John George, founder and executive director of Detroit Blight Busters. “It’s the next step in neighborhood growth that will begin to connect our residential districts to our commercial corridor, while increasing the supply of affordable homes in our neighborhood.”

Detroit Blight Busters and CHN Housing Partners chose LOHA Architects and JGJ Construction to bring the development to life. The footprint will consist of four separate two- and three-story apartment buildings. CHN Housing Partners will manage the property and employ an on-site manager who will be available. Other amenities will include central air conditioning, in-unit washers and dryers, one parking space per unit and a community and business center.

“The Orchard Village Apartments development will not only add more affordable housing options for Detroiters in District 1,” said Detroit City Council President Pro Tem James Tate. “It will also add more foot traffic that will shine a light on our small businesses as they continue to grow here in Northwest Detroit.”

Construction for the development is expected to begin in spring of 2023 and be completed in summer of 2024.

Architectural drawings can be found in the links below: