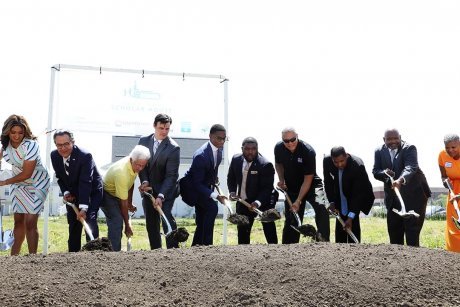 Watch a video of the event here.

“Louise’s impact on her family, this community and our nation was a result of back-breaking work that gave her children the opportunity to become educated and serve,” they said in a joint statement. “Louise would be so proud today as this community comes together to support single parents who are working hard to earn a college degree and make a future for themselves and their children.”

The Louise C. Stokes Scholar House will remove barriers to economic opportunity by providing affordable housing and wrap-around services for adult college students and their children to support educational success. The first of its kind in the Cleveland area, the successful Scholar House model was pioneered in Kentucky.

“We are thrilled that this new facility will bear the name of Mrs. Stokes,” said Kevin J. Nowak, executive director of CHN Housing Partners, “The Louise C. Stokes Scholar house will stand as a testament to her unwavering support of her children and the importance she placed on education. We at CHN believe that stable, affordable housing unlocks the keys to success for both parents and their children.”

CHN Housing Partners is developing the project and will own and manage the property. United Way of Greater Cleveland convened community partners and rallied support for the project.

“Fifty percent of Cleveland’s children live in poverty, and less than 8% of single mothers who live in poverty complete their post-secondary education, but we refuse to let poverty define our city,” said Augie Napoli, president and CEO of United Way of Greater Cleveland. “The Louise C. Stokes Scholar House’s two-generation approach is designed to end poverty’s stranglehold on the lives of the parents and children who enter its doors, and we’re delighted it is named after such an inspiring Cleveland figure.”

The City of Cleveland committed $1.2 million in funding for project construction.

“The Louise C. Stokes Scholar House is precisely the type of development we need in our city to break the cycle of poverty and plant seeds for a brighter future for Cleveland,” said Cleveland Mayor Justin Bibb who spoke at the event.

Cleveland Ward 5 Councilman Richard Starr, who also spoke at the event, said, “We have young parents who are hungry for opportunity and want to make an impact. This development will give them the support they need to succeed.”

The Louise C. Stokes Scholar House Partners will offer the following for students and their children:

The development is located at Community College Avenue, within walking distance of both Cuyahoga Community College (Tri-C®) and Cleveland State University (CSU). The project is funded by a Low Income Housing Tax Credit (LIHTC) award from the Ohio Housing Finance Agency. Other funders include the City of Cleveland, The William J. and Dorothy K. O’Neill Foundation and RSM US Foundation. Enterprise Community Investment, Inc. is the equity investor and Citizens Bank is the construction lender. Hiti, DiFrancesco + Siebold designed the building and Regency Construction Services, Inc. is the general contractor.