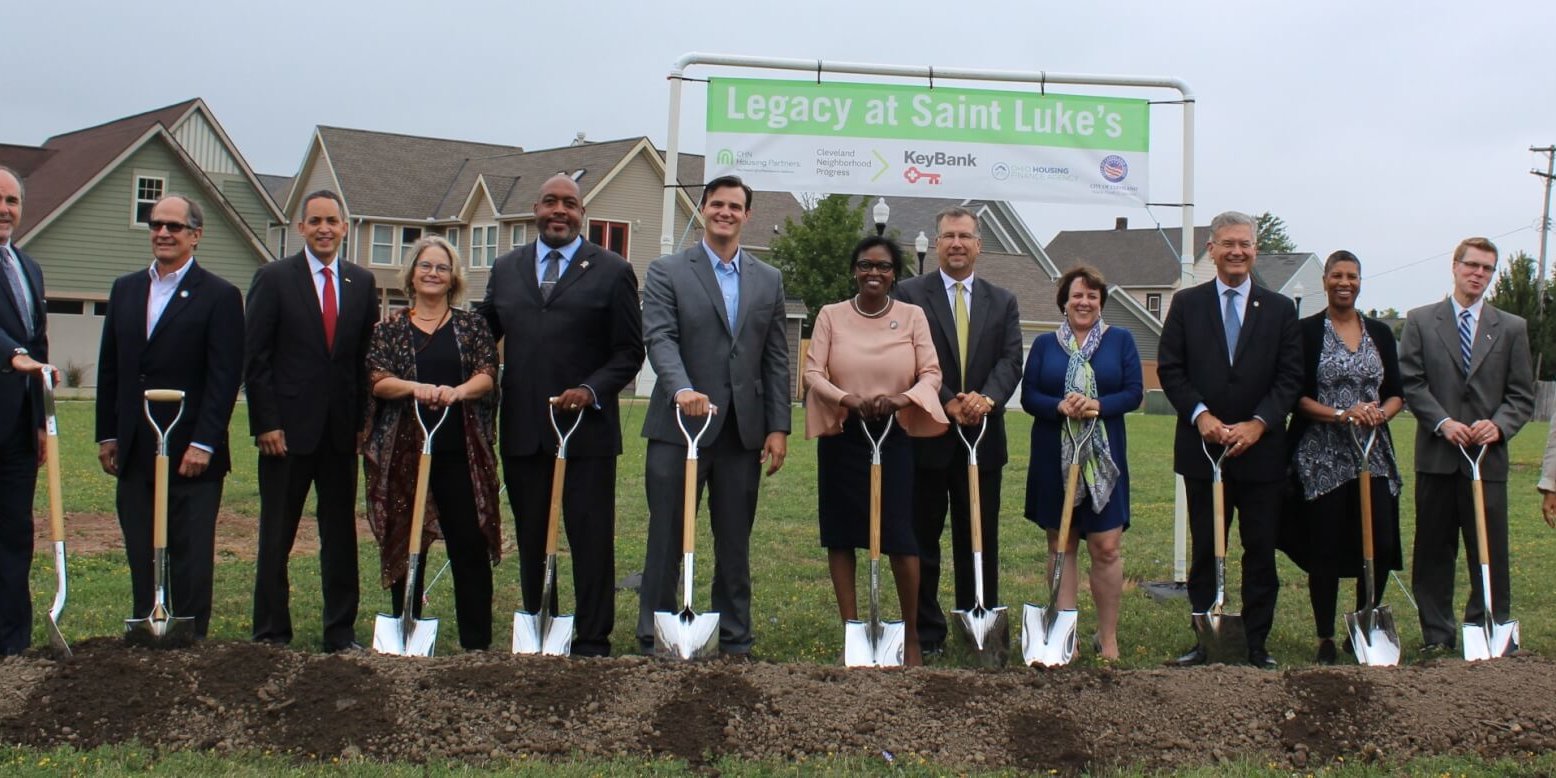 Sept. 4, 2019 – On Aug. 27, CHN Housing Partners (CHN), Cleveland Neighborhood Progress (CNP) and KeyBank celebrated the completion of the next phase of the revitalization of the Saint Luke’s campus in Cleveland’s Buckeye-Shaker neighborhood with focus on two projects: Legacy at Saint Luke’s, a new 27-unit single family affordable housing development, and the KeyBank Events Stage at Britt Oval, a neighborhood outdoor space designed to be a community amenity. The event highlighted KeyBank’s contribution to those two projects as well as a recent investment in a new targeted approach to community development in the Buckeye-Woodland and Glenville neighborhoods.

“What’s happened in this neighborhood after Saint Luke’s Hospital closed is nothing short of a rebirth,” said Joel Ratner, president and CEO of Cleveland Neighborhood Progress, which has anchored and led Saint Luke’s $63 million revitalization. “We stand here today because Clevelanders have the will and can muster the resources to move neighborhoods forward,” added Ratner.

The Saint Luke’s hospital building currently stands as a mixed-use anchor in the Buckeye neighborhood. The hospital closed in 1999 and stood vacant until 2006 when CNP purchased the structure and transformed the campus into a LEED Gold-rated, transit-oriented, mixed-use community amenity, complete with 139 units of independent senior housing, Ohio’s top rated K-8 public charter school, Boys & Girls Club, and the offices of both CNP and Saint Luke’s Foundation. This landmark anchors a 20-acre LEED ND revitalization area designed by the community in 2006, and now includes a public library, a second elementary school, affordable housing and a redesigned RTA station. This single adaptive reuse project has leveraged nearly $120 million of community reinvestment and stands as a symbol of resilience for the community.

“There’s nothing we can’t achieve together once we have a plan and the right partners to execute it,” said Kevin J. Nowak, executive director of CHN Housing Partners, which is partnering with CNP on Legacy at Saint Luke’s. CHN is the project’s developer, builder and manager. “We are grateful to KeyBank for project support and our funders—Ohio Housing Finance Agency (OHFA) and the City of Cleveland– for investing significant dollars to make Legacy a reality for the Buckeye-Shaker neighborhood,” added Nowak.

CHN and CNP are partners on Legacy at Saint Luke’s, an affordable housing development immediately north of the revitalized Saint Luke’s Pointe in the Buckeye Neighborhood. CHN will build 27 townhomes, providing a housing opportunity to low-income families within one mile of University Circle and a short train ride to Downtown

Cleveland, two of the largest job centers in Ohio, and within walking distance of daily amenities. Residents of Legacy will have access to CHN’s programs that offer individually-tailored services to each household to improve their overall wellbeing, including health, education, employment and personal finance. Funders of Legacy at Saint Luke’s are the Ohio Housing Finance Agency and the City of Cleveland. KeyBank supports the project. City Architecture designed the project and CHN’s construction arm will build it. Construction will begin this fall and is expected to be completed in the fall of 2020.

The KeyBank Events Stage sits at Britt Oval, an element of the revitalization of the Saint Luke’s campus. In addition to the KeyBank Events Stage, Britt Oval includes free public parking, recreational facilities, and an open greenspace that includes a raised natural meadow with a stunning view of Cleveland’s skyline. Britt Oval was made possible with support from Dominion Energy, the State of Ohio, the City of Cleveland, Saint Luke’s Foundation, the Kent H. Smith Charitable Trust, the Louise S. and David H. Ingalls Foundation, Enterprise Community Partners and KeyBank.

“Our support of the transformation that is taking hold in Cleveland’s Buckeye Neighborhood is central to our purpose of helping the communities we serve thrive,” said Don Graves, head of Corporate Responsibility and Community Relations for KeyBank. “As Cleveland’s hometown bank, we are proud to stand with our partners and bring hope and opportunity that will continue the rebirth and momentum taking place across our city.”

KeyBank is also investing $2.1 million in the Buckeye Woodland and Glenville neighborhoods over four years to allow CNP to support those neighborhoods’ community development groups, Burten, Bell, Carr Development, Inc. (BBC) and Famicos Foundation, in providing residents with critical services. Those services include home repair and rehabilitation, planning and design support, financial health education and improvements to vacant lots and other properties in areas identified as investment zones. Those are: Circle North, East 111th to East 118th, and Ashbury to Buelah; East 98th, Parkgate to East Boulevard in Glenville; and Saint Luke’s, Woodhill to East 16th, Woodland to Shaker Boulevard.

News of CHN and CNP’s partnership on the Saint Luke’s project was featured in the Aug. 26, 2019 edition of The Plain Dealer. Click here to read the news story. 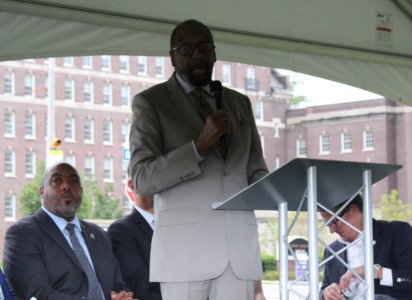 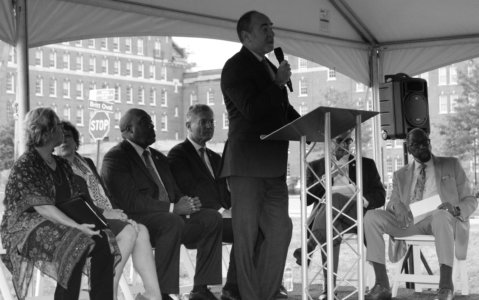 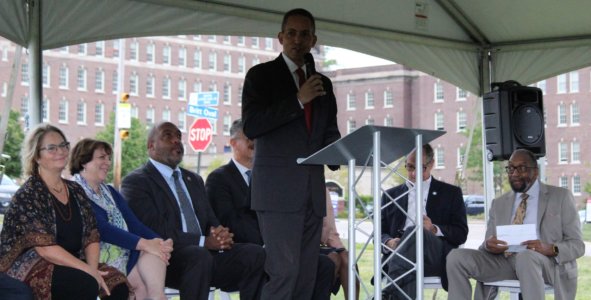 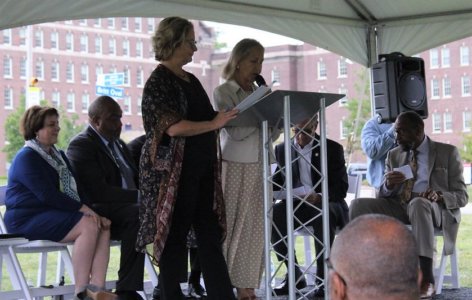 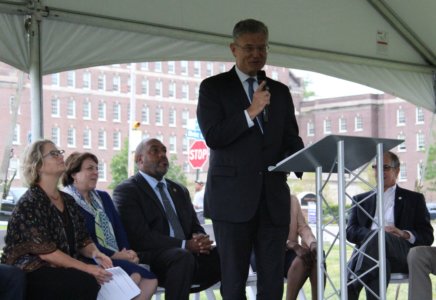 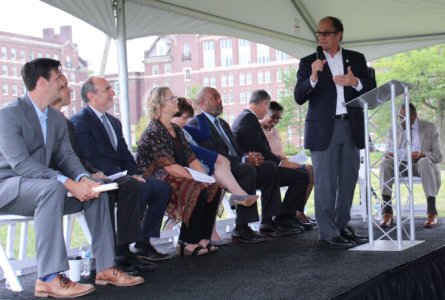 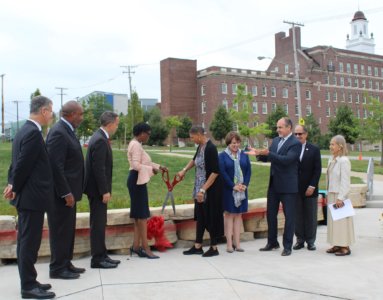 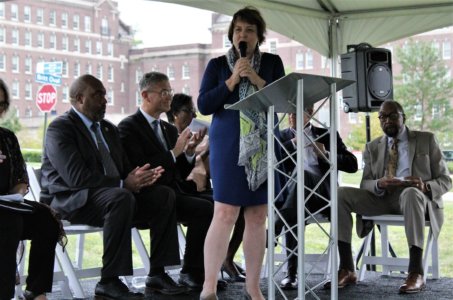 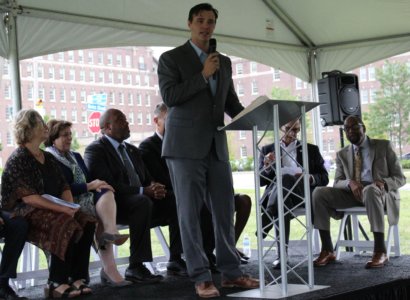