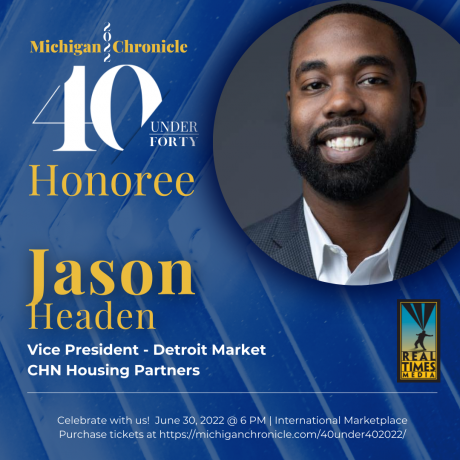 Earlier this month, our very own Jason Headen, VP of Detroit Market, was recognized as a Michigan Chronicle 40 Under 40 honoree.

Each year the Michigan Chronicle 40 Under 40 Awards recognize local African American young professionals who inspire others through their vision, leadership, exceptional achievements, and participation in community service. They are individuals who exemplify extraordinary stature, poise and integrity who continue to break the mold and affect change in their professions and community.

Congratulations, Jason! Thank you for your dedication to providing affordable homes for Detroiters and their communities.

Jason Joined CHN in 2019 where he began shepherding CHN’s growth in Detroit through CHN Housing Partner’s lease purchase partnership with Cinnaire and the City of Detroit’s larger preservation action plan. Jason has also been responsible for spearheading CHN’s role as the Network Manager of the Detroit Housing Network – an alliance of housing nonprofits that have come together to provide clear and equitable access to housing services in Detroit.

Prior to joining CHN, Jason was the Director of State and Local Government Affairs for Quicken Loans where he led community engagement, advocated for policy change and oversaw the $3.3 million renovation of Breithaupt Career & Tech Center.

While Jason’s most recent roles have positioned him as a leader in Detroit’s development and affordable housing communities, he always represents his Detroit-based upbringing. After graduating from Rennaissance High School and Wayne State University, Jason began his career as a property manager where he oversaw diverse property portfolios for Bedrock Detroit, Independent Management Services and Southwest Housing Solutions. Jason also made news in 2021 when he announced his development project in the Bagley/Fitzgerald neighborhood, where he will be co-developing Detroit’s first Black-owned brewery.

His collective experience has led to board member invitations for the Citizens Research Council of Michigan (active), Building Community Value (active) and the Detroit Housing Commission (2014 – 2021).

Bring your friends, family and pets to the Believe in Home 5K on August 13! It's going to be a great day to walk, run or jog as we celebrate the power of a permanent address!
Register today at https://bit.ly/CHN5K

Our staff and volunteer attorneys will be out in the neighborhoods of Northeast Ohio during July to offer free advice about civil legal issues.
View the full events calendar on our website for more details: https://loom.ly/X9yZT8s