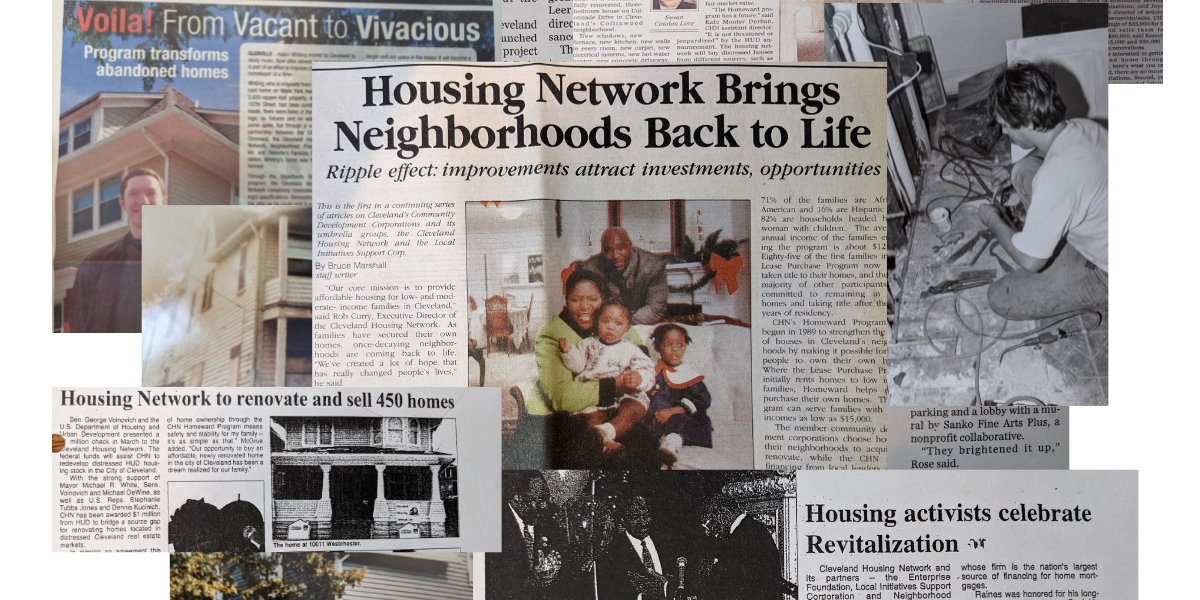 2021 marks CHN’s 40th anniversary. We are truly proud of the hundreds of thousands of lives we have changed over the past 40 years, whether through connecting low-income families to affordable homeownership, building supportive housing for people experiencing homelessness or providing financial education and community resources for people experiencing housing instability. Throughout September and October, we will be highlighting pivotal points in CHN’s history on our blog. Please tune in as we explore this rich history of believing in the power of a permanent address. This week’s post provides an overview of CHN’s work from 1998 to the foreclosure crisis, and was greatly informed by an interview with our third Executive Director, Rob Curry. 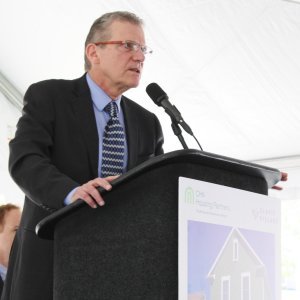 Like Chris Warren and Mark McDermott before him, CHN’s third Executive Director – Rob Curry – began his career as a community organizer. Curry took CHN’s helm in January 1998. By then, Cleveland Housing Network had established itself as an accomplished developer and provider of affordable housing in Cleveland. It was the first organization in the country to use the Low-Income Housing Tax Credit (LIHTC) as a source of critical equity capital to bring sustainability and scale to its Lease Purchase program. It had launched its Family Success program to help stabilize the finances of leasing families to prepare them for homeownership. It had begun developing single-family for-sale homes through its Homeward program. And it had expanded its partnerships with Community Development Corporations (CDCs) throughout Cleveland. Curry, together with a growing and capable CHN staff, built on these successes by strengthening partnerships, undertaking strategic development projects, and nimbly responding to emerging community needs.

In 1998, CHN launched a major five-year initiative to undertake critical capital improvements to its first 1,000 Lease Purchase homes. Like all innovators, CHN had learned important lessons in its early years. One key lesson was properly calibrating the level of capital investments needed to sustain these older homes through a 15-year rental phase and the eventual sale to Lease Purchase residents. To increase scale and keep rents affordable for the lowest income families, CHN’s original model was based on what Curry described as a “decent, safe and sanitary” standard. To successfully sustain these homes, much more substantial capital investments were needed during the development phase. Curry joined CHN at this critical juncture. Working with the State of Ohio, the City of Cleveland, and the Enterprise Foundation, he led a campaign to recapitalize the existing portfolio and simultaneously engineer a substantial change to the business model for the future development of Lease Purchase homes. This included updating CHN’s housing rehab model from a modest scope of work to a comprehensive renovation approach with an eye towards durability and longevity. The resulting homes, while more costly to develop than before, were more efficient, higher quality renovations better positioned to stand the test of time.

These considerable increases to CHN’s renovation costs, coupled with the abundance of vacant lots left by the City’s demolition strategy, led CHN to begin constructing new homes throughout the city. The switch to new construction was accelerated by two major partnerships with Cuyahoga Metropolitan Housing Authority (CMHA). One initiative focused on developing replacement housing in Hough, Glenville and East Cleveland. The other focused on developing “offsite” public housing, including construction of new single-family homes and senior housing, as well as renovation of four historic buildings in Ohio City and Detroit Shoreway. CHN also began preserving aging Section 8 apartment buildings, with an emphasis on acquiring and renovating five multi-family buildings along the Euclid Corridor near East 79th Street. By expanding its expertise into multi-family development, Curry and CHN  paved the way for the organization’s role in the watershed Housing First initiative. 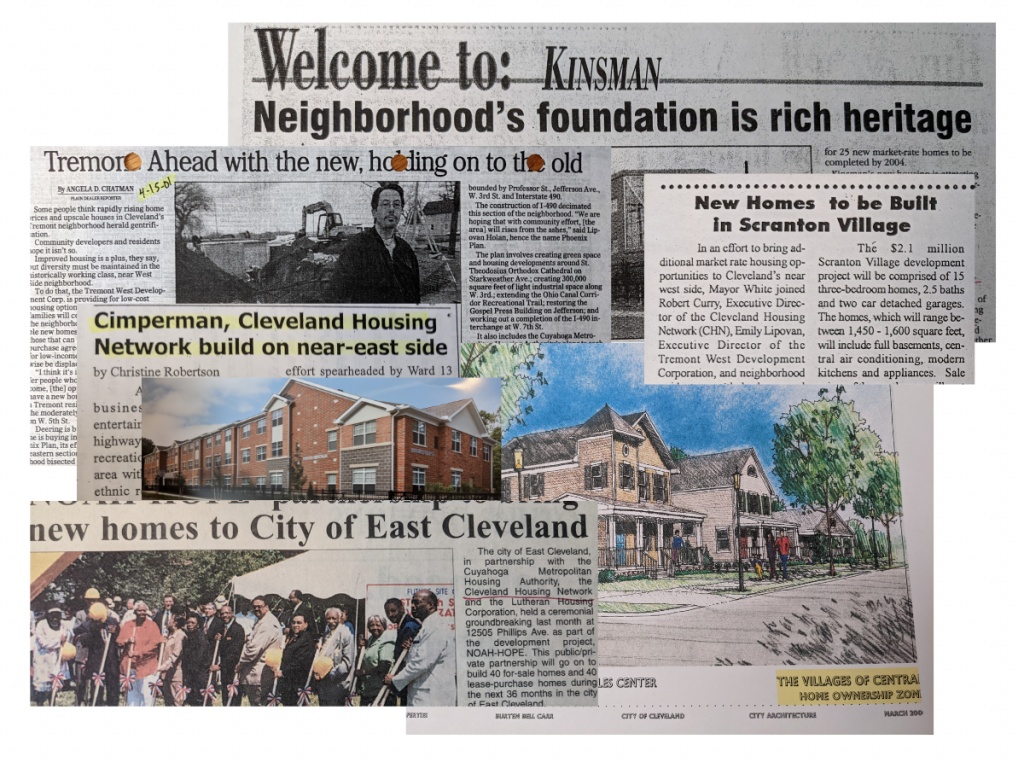 In 2005 CHN became one of three primary operating partners in the Housing First initiative – by far CHN’s largest development undertaking to date. Led by Enterprise Community Partners, Sisters of Charity Foundation, and the Cleveland/Cuyahoga County Office of Homeless Services, the Housing First initiative represented a collaborative effort among local stakeholders to develop 1,000 units of Permanent Supportive Housing (PSH) to end chronic homelessness in Cuyahoga County. With EDEN, Inc. and FrontLine Service as its two operating partners, Emerald Commons opened on January 1, 2007. It would become the first of many PSH buildings developed by CHN and its partners over the ensuing decade and a half.

For one, CHN had long recognized the role of utility costs and debt in driving housing instability. The organization had launched a weatherization program in its founding year to help Cleveland homeowners reduce their energy expenses and upgrade the infrastructure of their homes. This effort expanded in 1997 to include a utility assistance program designed to help homeowners meet their short-term utility costs. In 2000, CHN expanded upon these prior efforts. With federal funding available through the State of Ohio, CHN launched its Home Energy Assistance and Electric Partnership programs to help more Clevelanders reduce home energy consumption and utility bills. 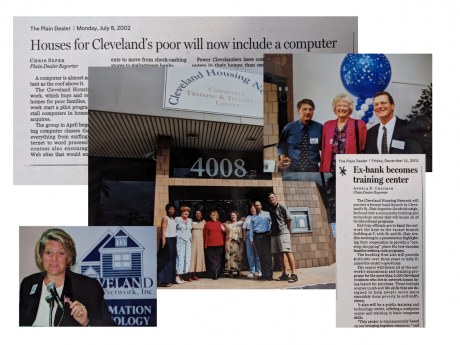 In 2002, CHN launched what would become an essential community resource – the Community Training and Technology Center (CTTC). CTTC was a continuation of the supportive services CHN launched in the 1990s, but focused on broader community education. Within five years of opening, the center had provided more than 7,000 low-income Clevelanders training and one-on-one counseling in computer technology, financial literacy, and homeownership skills.

The year the Community Training and Technology Center opened was also a watershed moment for CHN’s Lease Purchase program. As discussed in the previous posts, the Lease Purchase model was fueled by LIHTC, which first became available in 1987 and included a mandatory 15-year rental period. Starting in Year 16, families could take title to their homes. As the first cluster of homes reached Year 16 under Curry’s tenure, CHN mobilized to ensure that every lease purchase family had an opportunity to purchase their home. This transition to selling homes in Year 16 represented a significant capacity building moment, with nothing less than the ultimate success of the program at stake – delivering the promise of homeownership to its Lease Purchase residents. At that time, before the foreclosure crisis, banks were eager to provide families with mortgages to purchase their homes (this would change dramatically in later years, as we’ll discuss in our next post). Every year, additional homes reached Year 16, and nine out of ten families took title. 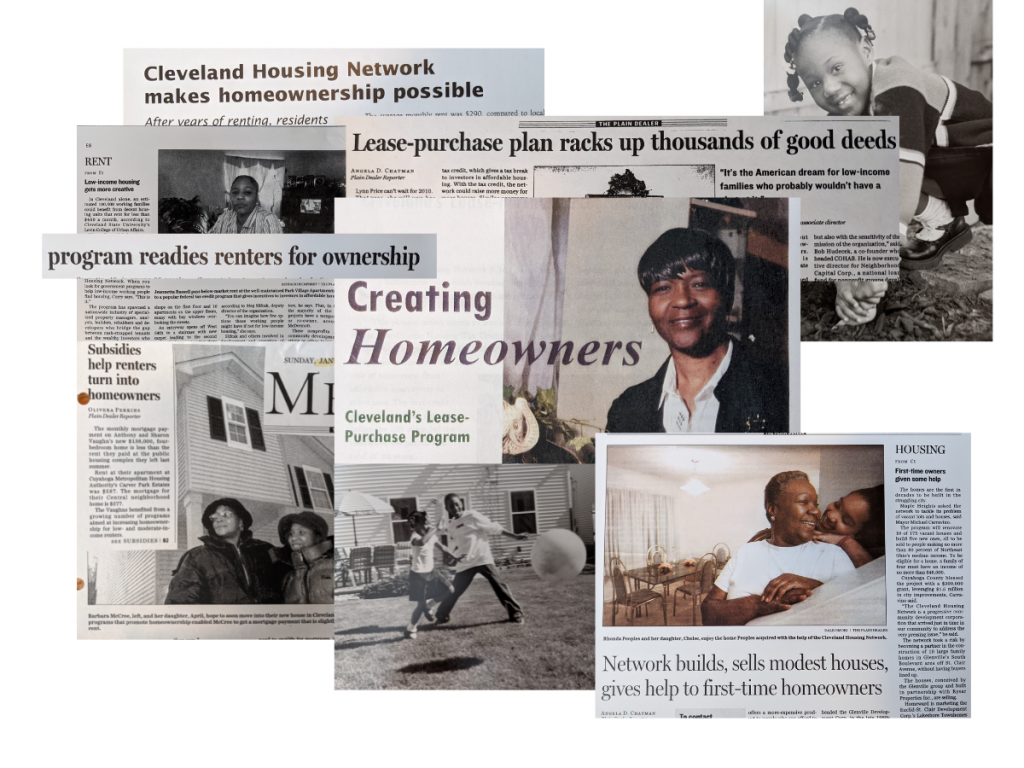 CHN’s Homeward program also experienced continued growth during this timeframe. Homeward’s purpose was to develop and sell single-family, near-market-rate homes to Clevelanders. Throughout the 1990s and early 2000s, the program generated more than $100 million in capital investment in Cleveland’s neighborhoods, leveraging resources from partner mortgage lenders, the State of Ohio, and the City of Cleveland. More than 1,300 homes were developed and sold, and incentives including tax abatement, reduced-interest-rate mortgages, and reduced closing costs gave homebuyers one of the best financial packages available in the City of Cleveland. In the face of growing concerns about slowing trends in national housing markets and the mortgage industry, in February 2006 Curry made the decision to halt any new production through the Homeward program. It was a decision that would seem prescient less than two years later.

By November 2007, the U.S. foreclosure crisis and the international financial crisis it triggered were well underway. The number of unsold homes in CHN’s Homeward inventory posed a critical financial challenge that took years to successfully resolve. Cleveland was one of the hardest-hit locations in the country. In just three months, 783 foreclosure notices were filed in Slavic Village’s 44105 zip code, the highest in the nation. Many of these homes were boarded up and abandoned, leaving scars that Cleveland is still working to heal.  In our next post, we’ll see how CHN responded to this avalanche of community need, weathered the financial crisis, and set the stage for the next step in its evolution.