When Kevin Nowak became Executive Director of CHN Housing Partners in July 2019, he had been involved with CHN for a decade. He brought with him a rare combination of experiences in banking, housing, and the law. And he had a plan. 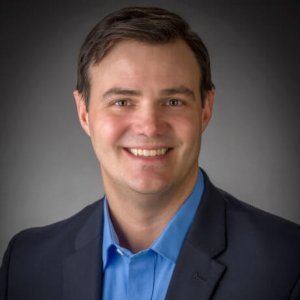 Kevin’s introduction to CHN came in 2009 from his colleague Robyn Minter Smyers, a Partner at Thompson Hine LLP. Robyn asked if Kevin would be interested in serving on CHN’s Board of Directors—an offer he readily accepted. Nowak left the law firm soon after, moving to KeyBank’s Community Development Corporation. He continued volunteering with CHN, serving as its Board Treasurer and as a member of its Executive Committee. At Key, Nowak had risen quickly to become its National Equity Investment Manager responsible for managing a portfolio of affordable housing and community development investments in a 13-state region.

Nowak’s tenure on CHN’s Board coincided with the organization’s reckoning with the effects of the foreclosure crisis and the recession it triggered. The crisis had deep and lasting impacts on Cleveland’s real estate markets, as well as CHN’s work and the families it served. By recognizing these impacts and deploying new strategies, CHN had won national praise for its work in stabilizing neighborhoods and keeping people in their homes. Out of the crisis and CHN’s response, the organization developed a renewed sense of urgency to address complex, systemic problems. It was time for a rethinking of the organization’s role in Cleveland and beyond.

That rethinking began with succession planning. CHN had only changed Executive Directors twice in its history. By the mid-2010s, then-Executive Director Rob Curry had concluded that fresh leadership would be critical to ensuring a visionary and growth-oriented future.

While Curry was thinking about CHN’s future, Nowak was considering how to best contribute to both Cleveland and CHN. While he didn’t come from the world of community organizing as Executive Directors Curry, Mark McDermott, and Chris Warren had, Nowak had other unique strengths, including private sector real estate and affordable housing experience that would be needed to grow the sustainability of CHN’s platform. Importantly, Nowak also came to the job with a deep connection to CHN’s mission that was fostered by his experience growing up in Detroit and seeing firsthand the benefits of homeownership on a young family of modest means. His parents – both blue collar workers in the city – were able to send Nowak to college leveraging equity achieved from their modest home. Nowak also volunteered with Habitat for Humanity at an early age, which drew him to CHN’s mission. Determined to forge a deeper professional connection with his passion for affordable housing and homeownership, the possibility of leading an organization like CHN had deep appeal.

When Curry and Nowak compared notes in 2015, an opportunity was born. Curry hired Nowak in 2016 as CHN’s General Counsel and Director of Strategic Initiatives. Curry made it Nowak’s responsibility to lead CHN’s leadership team in laying the groundwork for CHN’s future and, in the process, prepare himself for the Executive Director role.

As Director of Strategic Initiatives, Nowak began the process of integrating CHN’s products and services into six vertical lines of business:

In 2019, Curry stepped down, and Nowak became CHN Housing Partners’ Executive Director. In the two years since, he has made lasting impact on the organization. Kate Monter Durban, one of CHN’s first employees and now its long tenured and outgoing Assistant Director, saw this potential early on. She notes:

“Since its founding in 1981, CHN has had the benefit of stable and exemplary leadership. Each Executive Director has contributed to CHN’s growth and sustainability in unique and really important ways. As its fourth Executive Director, Kevin brings an incredible mix of skills and experience to lead CHN in this current growth phase. He is such a compelling leader, and the passion and know-how he brings will benefit CHN for years to come.”

Perhaps the greatest marker of Nowak’s tenure has been CHN’s rapid but strategic growth – much of which has hinged on repositioning the organization as a collaborative and holistic problem solver, capable of not just doing, but also leading.

In the past, CHN had always been known for its community responsiveness, harnessing innovation to address specific community needs through strong internal programs and initiatives like its flagship Lease Purchase Program. Nowak built upon that solid foundation, bringing his private sector experience to help CHN establish distinct legal entities and subsidiaries. This would allow the organization to 1) sustain various growth areas in response to emerging needs and 2) leverage specific areas of expertise to help other communities and organizations flourish. The result has been a nonprofit that collaborates and co-designs solutions at scale and in deep partnership with community partners. “This,” Monter Durban explains, “is uniquely Kevin.”

A very tangible example of such growth is CHN’s consolidation of Neighborhood Housing Services (NHS) of Greater Cleveland into the CHN umbrella in 2019. By consolidating the two organizations under one leadership structure, CHN was able to maintain and improve the services that NHS delivered, augment and improve its housing counseling platform and benefit from the expertise, capacity, and partnerships that NHS brought to the table. For example, the affiliation opened the doors to a critical resource that Nowak and CHN’s leadership recognized as extremely valuable for the organization and the communities it serves: membership in the national NeighborWorks America network. Notably, CHN’s NeighborWorks affiliation came just in time to help the organization weather the initial storm of COVID-19, with extra funding available to network members.

In recent years, CHN’s geographic scope has also grown considerably in response to community and partner needs. As mentioned in last week’s Through the Years post, the Great Recession had exposed the limitations faced by CHN in operating within a single region. At the same time, leadership recognized that there were gaps in the capacity of local organizations to meet the affordable housing needs in certain neighboring markets. In response, CHN decided to expand into new geographic areas and build a multistate affordable-housing footprint, focusing on Northern Ohio, western New York, southeastern Michigan and western Pennsylvania. Concurrently, CHN launched a subsidiary, CHN Real Estate Services, and defined an array of housing development products and housing-related services, including development and co-development, community engagement, finance assembly, and construction and property management. 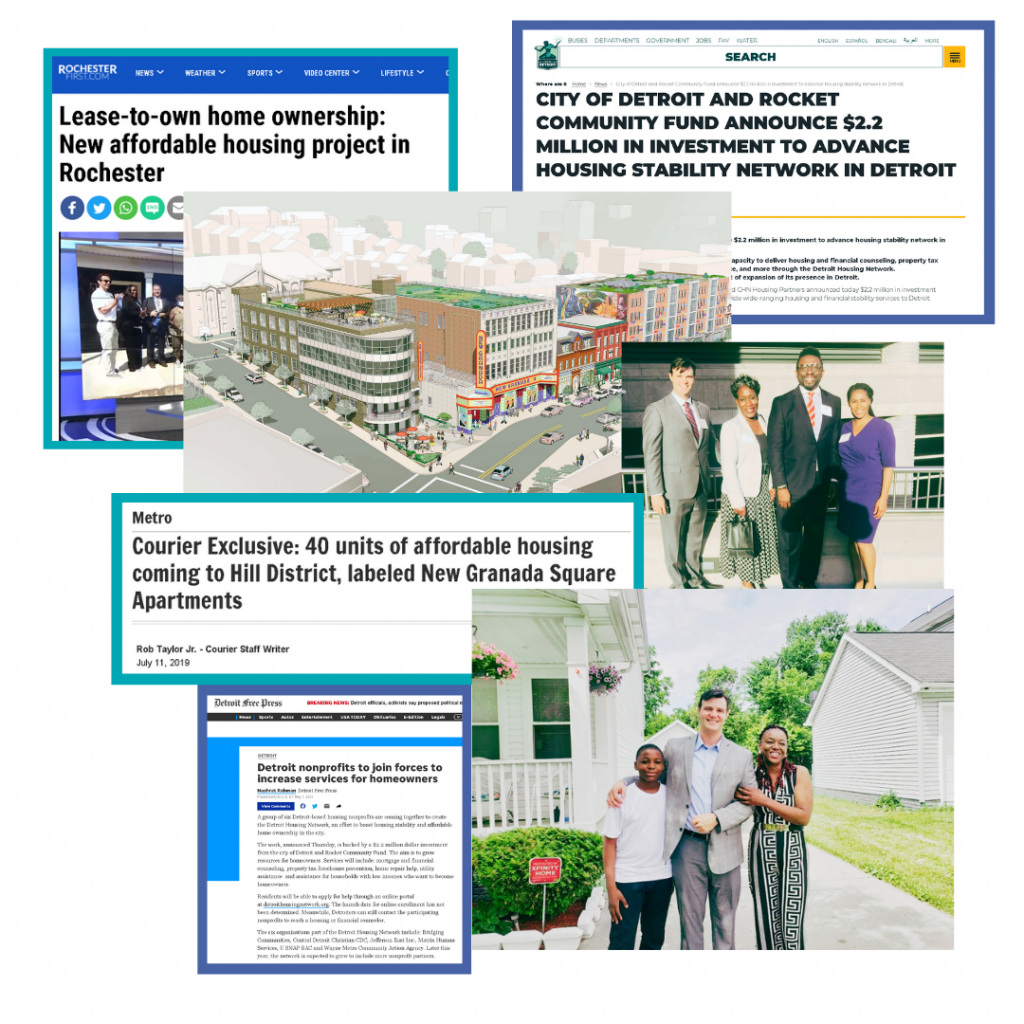 As stakeholders heard that CHN was willing to bring its unique skill sets to other communities, CHN began receiving requests for assistance from nonprofits and municipalities around the country. CHN now provides tailored consulting services throughout our multi-state footprint to grow the capacity of communities in need of affordable housing. Examples of stakeholders who reached out include our partnerships with the Urban League of Western New York, Pittsburgh’s Hill Community Development Corp.,  and Cinnaire in Michigan.

This geographic expansion was further catalyzed in 2020 when Detroit Mayor Mike Duggan asked CHN to bring together six Community Development Organizations (CDOs) to form Detroit Housing Network, a collaborative effort to spur sustainable and equitable housing stability and homeownership opportunity in the city. In Detroit, as in Cleveland, CHN’s role has been that of an engine – fueling the growth of existing resources and organizations through consulting and thought leadership, while also contributing direct services like property management, Year 16 Lease Purchase sales,  and development to rebuild Detroit’s weakened housing market.

Nowak notes, “When working in communities beyond Cleveland, we are working directly with on-the-ground stakeholders – funders, partners, community members – to co-design solutions at scale. We bring our proven track record and expertise to help them build an infrastructure to become more efficient, to collaborate, and to scale.”

And while CHN began expanding regionally, it continued to build upon its impact in its hometown, doubling down in Cleveland/Cuyahoga County to address systemic issues in our community contributing to housing stability, accessibility to homeownership and economic opportunity and the immediate destabilizing impacts of the COVID-19 pandemic. 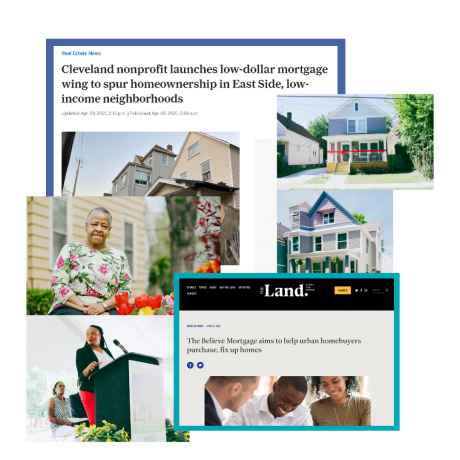 One key example is CHN’s emerging Community Development Financial Institution, CHN Housing Capital. CHN’s first foray into community lending began when banks exited Cleveland’s mortgage market in reaction to the foreclosure crisis. As discussed in our third Through the Years post, CHN then developed a seller-financing product and built a platform to underwrite and service loans to Lease Purchase families with no other options for financing their homes. Yet families interested in purchasing their Lease Purchase homes were not the only potential homeowners struggling to find financing; many Clevelanders—often people of color or those with imperfect credit history—were struggling to obtain lower-dollar mortgages from larger banks. This remains true today.

In response, in 2019, CHN Housing Partners formed another subsidiary, CHN Housing Capital (CHN HC), to provide access to capital for LMI homebuyers in Cleveland and Cuyahoga County. With program partners (including the City of Cleveland, Cuyahoga County, the Cuyahoga Land Bank, and Huntington National Bank) and funding from the JPMorgan Chase Foundation and the Congregation of St. Joseph of Cleveland, CHN HC launched three loan products in early 2021: the Believe Mortgage (which generally focuses on lending $70,000 or less to LMI borrowers), down payment assistance loans, and home repair loans.

Since launching CHN’s public facing lending products in April 2021, the community response has been overwhelming. Over 500 potential buyers have inquired about the Believe Mortgage alone. It’s a product intending to benefit individual homeowners, as well as broader communities by reducing the barriers to homeownership and undoing decades of racist and restrictive lending practices. Quoted in Crain’s Cleveland in August 2021, homeowner Danielle Quarles described the Believe Mortgage’s impact: “I have the opportunity to live comfortably. I don’t have to live paycheck to paycheck, and I’m able to do more activities with my kids now. It’s like a burden was taken off of me.” 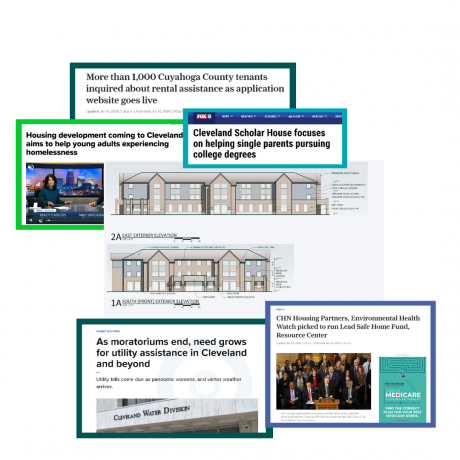 Looking forward, Nowak is ushering CHN through a wide array of strategic and responsive initiatives – new and innovative prospects that aim to improve the lives of LMI households in Cleveland and beyond. Critically, each is an example of deep collaboration and partnership with committed and innovative stakeholders. Some examples of these ongoing and growing initiatives that CHN is co-designing and co-leading with partners (including many more than can be named below!) are:

The common thread between all this varied and impressive growth? People and partnership. Today’s CHN is no longer limited by our own potential outputs. We are co-designers of the future, focused on uplifting the work of other communities, and fostering wide-reaching, sustainable, effective, and equitable solutions. Stay tuned for our upcoming (final) post of the Through the Years series, as we look at how this work has impacted and inspired our clients, tenants, staff, and board. 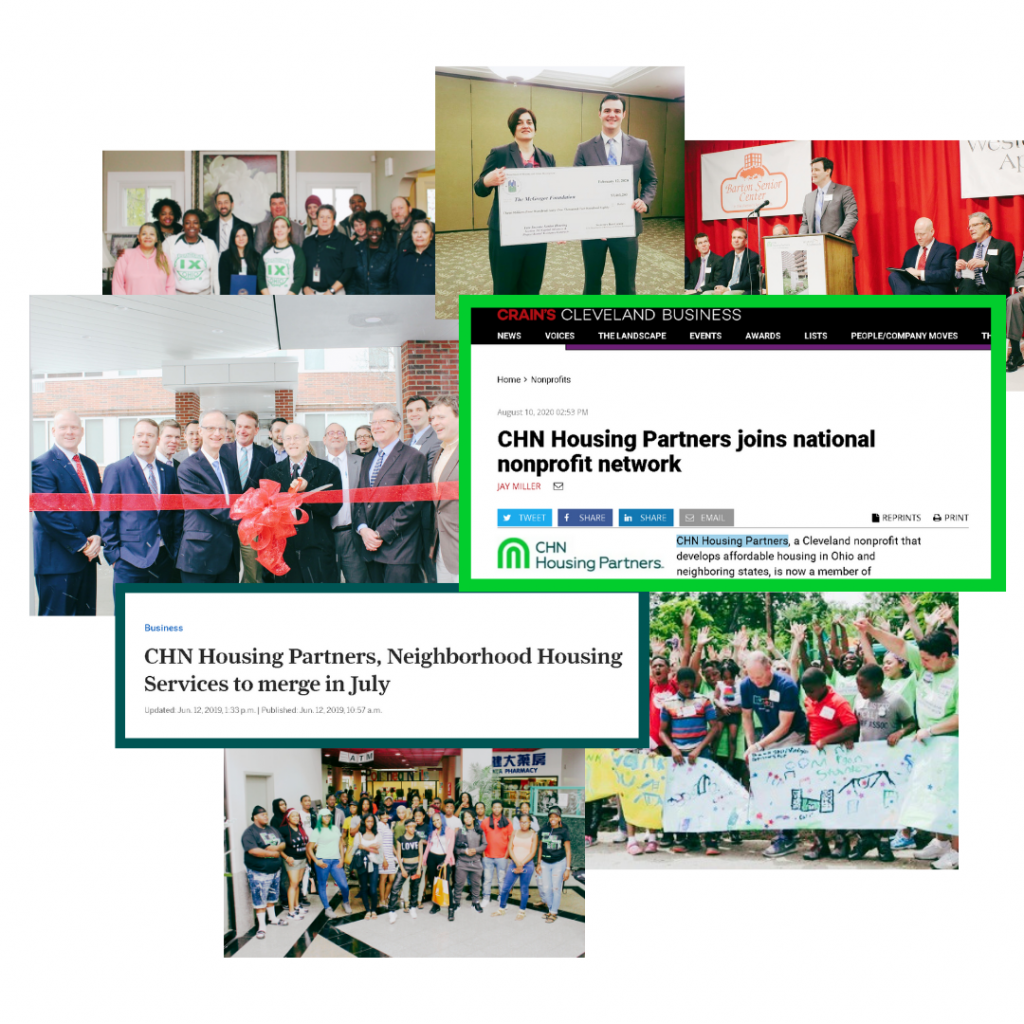